The 35th match of the Indian Premier League is played between Sunrisers Hyderabad and Kolkata Knight Riders.

The 35th match of the Indian Premier League is played between Sunrisers Hyderabad and Kolkata Knight Riders. Sunrisers Hyderabad won the toss at the Sheikh Zayed Cricket Stadium in Abu Dhabi and Kolkata Knight Riders were invited to bat first. Kolkata scored 163 runs for the loss of 5 wickets in 20 overs. In response, Hyderabad's new opening pair of Williamson and Bairstow gave a great start. Both scored 57 runs in the power play. However, in the next ball after the power play, Williamson dismissed Loki Ferguson. 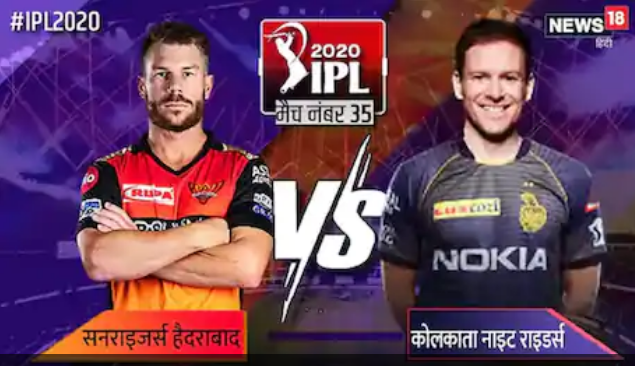 Williamson was dismissed for 29. Ferguson then bowled Priyam Garg for 4 to give KKR another victory. In the 10th over, Hyderabad felt the third tweak of Johnny Bairstow getting out. Bairstow was dismissed for 36 by Varun Chakraborty. Captain Warner then shared a 27-run stand with Vijay Shankar but Cummins gave Kolkata their fifth victory in the 16th over. Vijay Shankar was out for 7.

Earlier, Kolkata got off to a good start with Rahul Tripathi and Shubhaman Gill. The duo combined for 48 in the power play, but the final ball of the sixth over was bowled by Tripathi. He bowled Natarajan for 23. Kolkata completed their 50 runs in 6.5 overs. Kolkata were then taken over by Gill and Nitish Rana, both scoring 77 in the first 10 overs. 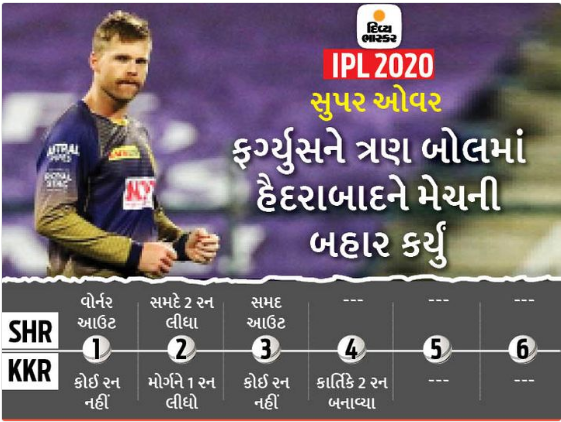 Shubhaman Gill could not take advantage of surviving on more wickets and in the 12th over he had to gather the pavilion in Rashid Khan's over. Gill scored 36 off 37 balls. Then Nitish Rana also lost his temper and caught Rashid Khan while playing a big shot. Nitish was dismissed for 29. Andre Russell also flopped once again and was dismissed for 9. Karthik and skipper Morgan then shared a half-century off just 27 balls to give Kolkata a good score. Dinesh Karthik hit an unbeaten 29 off 14 balls. Oyan Marg scored 34 off 23 balls. The two shared 58 off 30 balls.

Hyderabad in Super Over 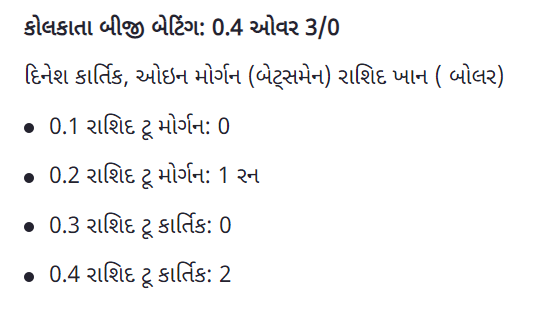 Earlier, Delhi and Bangalore had won the Super Over

Match tie between Hyderabad and Kolkata

Chasing 164 against Kolkata Knight Riders in Abu Dhabi in the 34th match of IPL 2020, Sunrisers Hyderabad have scored 163 for 6 in 20 overs. Hyderabad needed 18 runs in the final over to win the match, David Warner hit 3 fours in the final over bowled by Andre Russell. The final ball needed 2 runs, then a leg-bye came and the match was tied.

Warner became the first foreign player to score 5,000 runs in the league

Hyderabad captain David Warner has completed 5,000 runs in the league. He is the first foreigner to achieve this feat and the fourth player overall. In his first league, only Virat Kohli (5759), Suresh Raina (5368) and Rohit Sharma (5149) managed to cross the 5,000 mark. 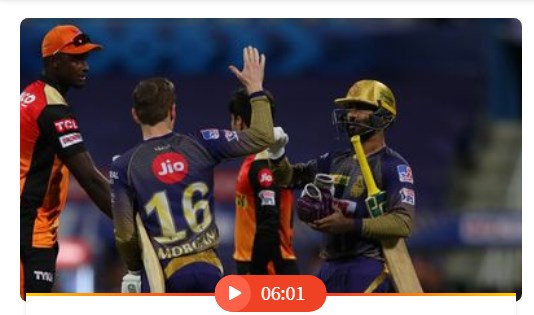 Garg and Pandey out in single digits

Priyam Garg was bowled for 4 by Ferguson. After that Ferguson threw a yorker and Manish Pandey also collected the pavilion. Pandey scored 6 off 7 balls.

Ken Williamson was caught out by Nitish Rana on the third man bowling by Loki Ferguson. He hit 29 off 19 balls with the help of 4 fours and 1 six. He had a 57-run partnership with Johnny Bairstow for the first wicket. No reason has been given as to why Williamson came to the opening in place of David Warner. The way Williamson was playing, it looks like he came into the opening to take advantage of the powerplay as he had trouble running. Johnny Bairstow was caught out by Russell on a long-off off Varun Chakraborty. He scored 36 off 28 balls with the help of 7 fours.